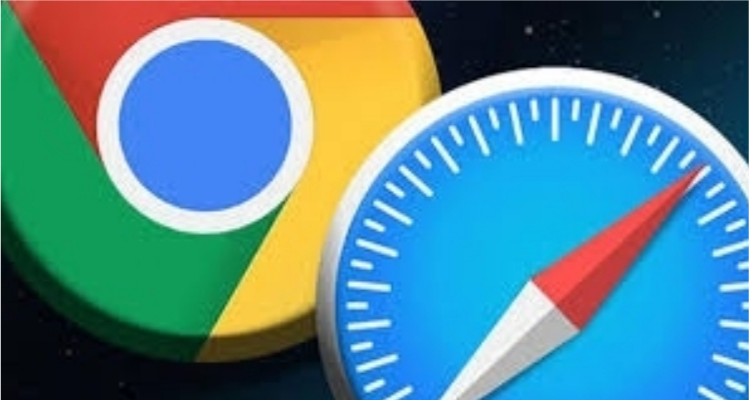 Very few of us spend any time thinking about our web browsers.  Your browser is the interface that connects us to the internet.

If you use a Google device, Chrome will be your default browser. Whilst on Apple devices, Safari is set as the default.

In the past we just had to make do with Internet Explorer, which is the proprietary browser of Microsoft, and came pre installed on all of their PC’s and laptops. These days we have multiple browsers to choose from, but for this article we will look at the two leading contenders…Chrome and Safari.

History of Chrome and Safari

Google Chrome is a very well known internet browser developed by  Google. It was released on September 2, 2008. Since then, “Chrome” as it is known has been made available on Android, iOS, Microsoft Windows, Mac, and Linux platforms.

Safari is the flagship browser of Apple, and was was initially released on January 7, 2003.

When Chrome was initially released, it was considered a ightweight and fast browser that was more popular than Safari and Firefox. Because of updates and new developments around online securityi that is no longer the case.

Recent tests show that Safari is better than Chrome because it is more energy-efficient, better at protecting your online privacy, and clearly, works better if you have an Apple ecosystem.

Chrome and Safari both work in their own way

Both Safari and Chrome offer their own unique features that are better utilised when running on their specific platforms, such as ChromeOS and macOS. For an ideal Safari experience, Apple devices are recommended.

As Apple brings new updates to its platform, third-party providers such as Google take time to integrate the new features. For example, Apple introduced Dark Mode in September 2018, which Safari supported from the beginning. However, Chrome didn’t introduce this feature until March 2019.

Chrome extensions come at a price

Chrome boasts a vast extension library for cookie management and Ad blocking for example, but that comes at the price of heavy consumption of your CPU, which will run you battery down very quickly.

While extensions are very useful for productivity and convenience, they do raise privacy concerns, with many of them having extensive access to your browsing data. Apple, on the other hand, thoroughly tests extensions before they are available for you.

Google is known for watching you

Google and Apple have different ways of making money from you. Google’s primary source of revenue is from advertising, which means you aren’t really the customer; you are actually the product.

Google makes money from you by finding out your interests and advertising you goods and services based on that information.

While you can configure privacy settings in Chrome to a certain extent, you’ll never be completely free from your data being harvested, by a company whose business model is built on using your data. If privacy is paramount to you, Safari is your best option.

Apple isn’t as keen on spying on you

Google has multiple data points in place to access your browsing information and data, Apple’s business model is different and is based on selling the user its hardware.

They will charge you top dollar for developing a product that’s unlike anything available in the market. Design and ergonomics feature high on Apple devices. Their software is usually free with annual upgrades and this will likely continue as long as their hardware continues to sell well in the market.

But importantly their browser, Safari, doesn’t earn by selling your information or displaying ads.

The Chrome v Safari debate will of course continue, but one thing is clear in our opinion, Safari is noticeably better than Chrome for its sheer simplicity, design, and privacy features.