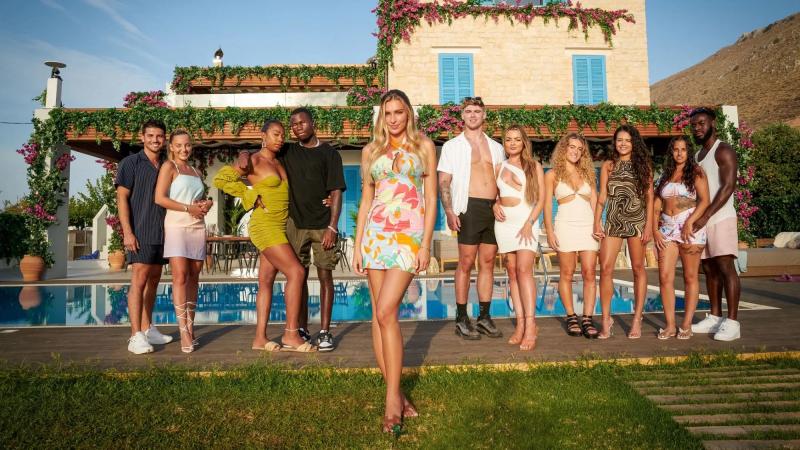 Former Love Island star Zara McDermott is the chosen host of BBC Three’s new reality dating series, ‘Love In The Flesh’, which focuses on five couples who have all been messaging via many online platforms, but have never met in real life…for various, hard to believe reasons.

One couple have allegedly been messaging for five years and never even FaceTimed….really !

However, the couples, all fine specimens, are whisked away from the pressures of daily life, AND their mobile streaming devices, to explore whether or not their online relationships can become “love in the flesh”…or remain just a TV producers wet dream.

Anyway, the BBC have kindly arranged for them all meet up in real life, at a five star beach house. There are bottles of bubbly, there are single beds and of course Zara McDermott is there to referee.

The anticipation of the couples actually meeting for the first time is the opening hook into the show, even though some of them have allegedly been “speaking” for three months…with one couple claiming to have been internet friends for five years. None the less we are encouraged to go along with the plot.

As the couples can establish almost instantly whether or not they have been described “exactly as it says on the tin”, the big build up could be said to be slightly anti-climactic.

But is there somebody else who might be better ?

With this in mind they are sentenced to share a luxury beachside mansion and pool to scope out whether there might be a 'relationship upgrade' on offer...by going on little set-piece picnic dates and having their “relationships” “challenged”.

How this perfectly normal situation eventually turns out for our lovely couples will be concocted over the coming weeks, but expect sun cream, subterfuge, jealousy, and jeopardy…as if anybody really cares !!